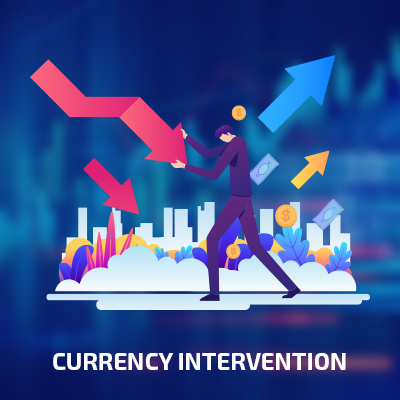 From time to time, in each country there is a need to stimulate the economy. There is a wide range of features and tools for this. Introduction of innovations, investments, tax cuts and many other options. One of the most effective mechanisms is currency intervention.

Currency intervention - the impact on exchange rates in the country, in order to change the status of the national currency and stimulate the economy.

How is it done and why?

Currency intervention is a fairly popular tool for influencing the economy. As a rule, the Central Bank conducts this operation, but sometimes it is done by the country's treasury. Not only the national currency, but also foreign currencies, as well as gold reserves, are subject to intervention.

Foreign exchange intervention is carried out for the following purposes:

The impact on exchange rates is not particularly complex. Central banks either buy foreign currency or sell it. The result of these operations is quite obvious:

As you can see, it all depends on how positively or negatively the national currency exchange rate affects the economy. Sometimes a national currency that is too high is an obstacle to the development of the economy, sometimes - on the contrary, it is too low and it would be nice to raise it.

Sometimes, in order to start a foreign exchange intervention, the Central Bank or a body with the necessary powers does not act on its own, but gives an order to a number of large banks of the country to take the necessary actions. Then the immediate site for the operation is selected. There are several such sites.

Currency interventions can be carried out on:

There are different types of currency intervention, which are grouped according to different characteristics.

According to the actions of the financial regulator (as a rule, the Central Bank plays this role):

• Verbal CI - in fact, it is not a financial transaction at all. The financial regulator only indicates the need for foreign exchange intervention, and this statement itself provokes a certain effect on the volatility of exchange rates. This effect is valid for a limited time. At its completion no real actions take place, the rates will return to their previous indicators.

• Real CI (Direct CI) - there is a real purchase or sale of national currency, which entails changes in the market. Since the direction of intervention and the start time are notified in advance, this type of currency regulation is popular among traders who have the opportunity to prepare and play on the volatility of exchange rates.

• Indirect CI - similar to the previous one, but the intervention itself is not carried out by the Central Bank, but by several large banks to which the Central Bank gives the necessary powers. This type of foreign exchange intervention can be characterized by strong and unpredictable fluctuations in the foreign exchange market, which can lead to panic among market participants. Dangerous situations also arise for traders who may suffer significant losses.

Depending on how currency regulation will affect the country's monetary base, currency interventions are divided into:

By the number of participating countries, currency interventions are divided into:

As you can see, there are many different situations for conducting a currency intervention. Such operations significantly change the situation in the foreign exchange market, which means they give traders additional opportunities to earn money on speculating exchange rates. Of course, this creates certain risks, but here, as you know, it all depends on the experience of the trader and his desires.